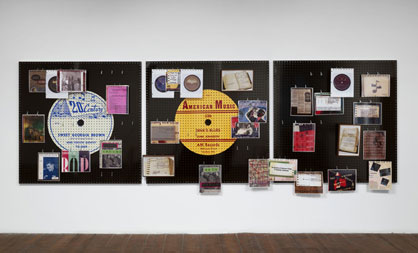 (Dis) order: A compulsion to collect

(dis) order provides a focus for art works which gather together multiple things in order to make something new. Often, it is only when we see a collection of things all in one place that we have a better understanding of difference. The gap between order and disorder can be a marginal thing. Through this process we can become aware of the patterns we might easily fall into. The nature of any exhibition is the gathering together of individual work towards a greater whole. In this particular case, the contrast between the four artists is an important part of the point. The work in the exhibition makes use of a range of strategies in order to explore the subject in more depth – classification, collection, compulsion, obsession, order, typology – all feature in different ways. Each element can be seen as a device in order for us to see the way in which we attempt to control and are at the risk of being controlled by external forces. From work that deals with the minutiae of everyday life, to work which tries to document complex systems – all provide an insight into the systems and processes by which we exist.

Ian Hamilton Finlay is predominantly concerned with the exploration of language – words, and other semiotic devices are utilised in his print works. Finlay’s series The Blue and Brown Poems is an example of his experiments with concrete poetry, showing his acute concerns with colour, shape, and composition. The exhibition also features a collection of postcard-prints by Ian Hamilton Finlay; it was through this medium that he would express initial ideas or thoughts, and over four decades produced over 700 small-scale works. A variety of themes can be extracted and explored from this vast collection including boats, planes and guillotines.

Susan Hiller’s Journey to the Land of the Tarahumaras is a series of works based on photographs taken during her journeys through Ireland, Australia and North America. The images are records of traces left by prehistoric cultures engraved or carved onto rock surfaces, though the serial works appear indecipherable due to the abstract nature of the images.

Torsten Lauschmann’s work is known for its innovative and idiosyncratic approach across a range of formats including sound, video, online projects and installation. Piecework Orchestra is an installation consisting of 40 household machines, from vacuum cleaners to sewing machines; Lauschmann manipulates this large assortment of elements to create a unifying, electronic orchestra. Lauschmann has accumulated hours of moving image footage for the work Skipping Over Damaged Areas; this piece shows a series of film titles with a voice over narrator, creating a new and unexpected narrative from the edited and appropriated footage. Growing Zeros (Digital Clock) functions as a clock and as a 24-hour long film; the clock appears as a recognisable digital LCD display, but each bar is a handmade wooden block, which are moved physically by Lauschmann. This laborious work is emphasised by replacing what normally runs by a technological process.

The work shown by Allen Ruppersberg is an extensive documentation of someone else’s collecting, notably someone that very little is known about. The Barry Thorpe Collection of 20th Century American Music by Allen Ruppersberg consists of a bookcase and 26 binders containing 1378 laminated colour copies, archiving recordings and pressings that originated from the United States. The collection itself is multifaceted. It shows no particular focus in one genre, no hierarchy, and instead provides a cross section of American popular music.

The idea of (dis) order is clearly not something designed to bring a neat and harmonious conclusion to the subject of collecting and collections – it barely scratches the surface. However, through the contrast and diversity in content, format, medium and intention, it does hope to reveal something that lies at the heart of the compulsion to collect.