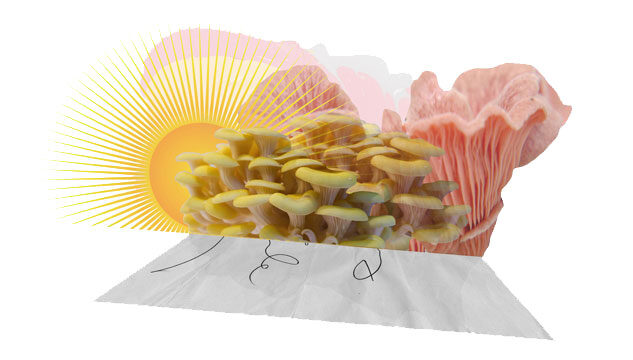 Writer Steve Hanson, artist Jane Lawson and chef Y Sok combine Steve’s recent discovery of a toxic remnant from his childhood with Jane’s interest in mycoremediation and Y’s culinary expertise to bring you a two-stage process of detoxification to digestion.

Booking at http://detoxtodelish.eventbrite.co.uk is required for this event.

Bring anything on paper, card or cardboard that you want to detoxify. This can be relics from a love affair gone bad, PIP claims, divorce papers, legal correspondence, rejection letters, The Sun, racist bile from social media – anything you would like to psychically purge.

You’ll then incorporate your toxic text into an oyster mushroom kit to take home and grow.

Oyster mushrooms can detoxify a wide range of substances including hydrocarbons and Jane Lawson has previously used them to detoxify key neoliberal texts such as Milton Friedman’s Capitalism and Freedom; their ability to detoxify hydrocarbons makes them an ideal candidate to detoxify an economic system based on the “cheap” energy provided by fossil fuels.

Bring your crop of mushrooms to be transformed into a communal meal by Cambodian-American chef and restaurateur Y Sok and share your experiences of transforming toxicity into nourishment.
BYOB!

Steve Hanson is a writer. Most recently, he published a collaged version of the King James Bible, under the title A Shaken Bible (Boiler House Press). He has a novel on the way called Last Days of Pompeii (Erratum Press) and his most recent volume of poetry is Proceedings (Knives Forks and Spoons Press).

He has written widely for publication, including Open Democracy, Street Signs, Social Alternatives.

Jane Lawson makes diagrams to help her understand the processes and structures that shape human society and our impact on the world, such as the global financial system, the Earth’s climatic history, the road to Brexit and the effects of technology on democracy. She also attempts to embody alternatives to the dominant cultural narrative of capitalist realism, often working with fungi in the belief that contact with their highly resilient lifecycles and interactions can teach us how to better care for each other and the world we live in. In 2018 she set up a UK node of the Radical Mycology network as part of the exhibition The Ground Beneath Your Feet at Castlefield Gallery.

Y Sok is a Cambodian-American chef who learned to cook traditional Khmer cuisine from her mother and relatives after her family was forced to emigrate by the Khmer Rouge take-over of Cambodia. She has restaurants in Marple (Angkor Soul) and Stockport (Mekong Cat) and also runs the Produce Hall in Stockport.

Detox to Delish is part of A Modest Show, brought to you by Division of Labour and Uncultured Creatives. It is funded and supported by Arts Council England and Greater Manchester Combined Authority.