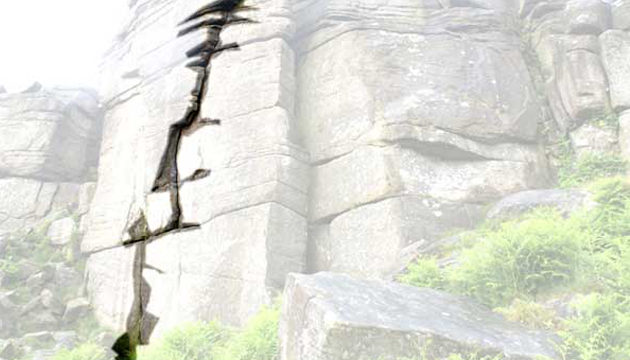 Within his exhibition, Radical Architecture, Shipsides makes reference to alternative readings of landscape – in relation to our access to it, engagement with it, and our understanding of it; for example the ideas explored by social critic John Ruskin (1819-1900), and actively furthered by local figures such as Benny Rothman (1911-2002, instigator of the 1932 Mass Trespass over Kinder Scout), and avant-garde climbers such as Joe Brown (b.1930). Ruskin’s writings continue to resonate in contemporary society, advocating class equality and respect, while the activities of Rothman and Brown during periods of mass unemployment and poor industrial relations opened up places and pursuits for the working classes previously only available to the middle and upper classes. Shipsides has visited significant sites in the Peak District that were made accessible and internationalised by the pioneering vision of such individuals, and has used them to create a climbable* sculpture based on a rock climb at The Roaches in Castlefield Gallery’s double height space.

Shipsides’ sculpture and images will be contextualised by the presence in the gallery of works borrowed from local municipal collections by Ramsey Richard Reinagle (1775–1862), Ruskin, and Grete Marks (1899–1990). This juxtaposition offers an alternative reading of Manchester’s heritage and geography, considering the radical outdoor movements of the 19th and 20th Centuries as points of departure; with the rise and fall of the city’s textile industry simply offering a backdrop rather than a focal point.

* Under supervision and at set times. Please see our homepage for details.

Dan Shipsides (b.1972, Lancashire) is based in Belfast. He has had numerous group and solo shows both nationally and internationally, including exhibitions at Platform, Istanbul; Smart Project Space, Amsterdam; Museum of Contemporary Art, Sydney; Riga Sculpture Quadrennial and Arnolfini, Bristol. www.danshipsides.com

Radical Architecture is Shipsides’ first exhibition in Manchester, and has been curated by The Salford Restoration Office. Works have been loaned by Buxton Museum and Art Gallery, Buxton; The Potteries Museum & Art Gallery, Stoke-on-Trent; and Ruskin Foundation, Ruskin Library, Lancaster University. Dan Shipsides: Radical Architecture has been supported by Awards for All and The University of Ulster.