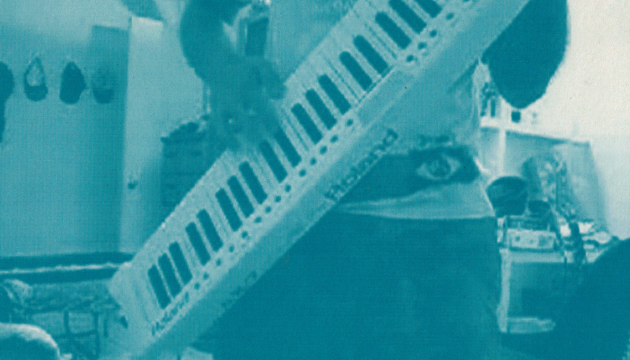 The installation has been produced by extracting clips from around two thousand amateur instrumental performers sampled from video sharing websites such as YouTube. Arcangel consequently wrote a piece of software that assembles each note according to the score, a method of production that may have interested Gould considering his well known attraction to the creative process of post-producing his own performances. In Arcangel’s installation, the two screens skip from one musician to the next with each note, while each screen carries a separate melodic line.

This exhibition will also showcase earlier works by Arcangel including I Shot Andy Warhol produced from a re-programmed Nintendo console, Permanent Vacation a humorous interpretation of electronic communication, and a single channel performative piece Sans Simon. To accompany the exhibition Cory Arcangel is doing a live performance with Paul Morley at the Greenroom. This performance; Interactive Lecture/Product Demonstration will take place on 8 February 2008.

The piece is commissioned by Film and Video Umbrella in collaboration with Castlefield Gallery, Manchester, Northern Gallery for Contemporary Art, Sunderland and Spacex Gallery, Exeter. Supported by Arts Council England.

More on Cory Arcangel:
Having graduated from the Oberlin Conservatory of Music with a degree in Technology in Music and the Related Arts, Arcangel came to the art world through a number of Internet based activities. These, in turn, lead to invitations from institutions for lectures and demonstrations, a performative aspect which naturally called for the creation of digital environments which have then evolved into art works. Frequent collaborations include the programming ensemble Beige, which Arcangel co-founded in 1998, and the Paper Rad Art Collective.

Arcangel (b. 1978, Buffalo, US) lives and works in New York. Arcangel has shown extensively in the US and Europe including Speed 3: Contrarreloj (Against the clock) at IVAM – Institut Valencià d’Art Modern, Valencia; Super Cinema, Solomon R. Guggenheim Museum, NY; Time Frame 2006 at P.S.1 Contemporary Art Center, NY; Whitney Biennial in 2004, NY; the Greater New York 2005 exhibition at P.S.1/MoMA; at The Museum of Modern Art; The New Museum of Contemporary Art and at The Guggenheim Museum, NY. He has also had solo shows at Max Wigram, London in 2007 called Request for Comments and at Migros Museum für Gegenwartskunst in 2005 in Zürich.