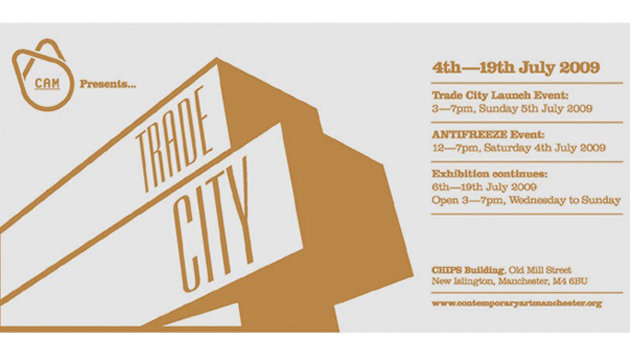 Contemporary Art Manchester is a new, not-for-profit consortium of visual arts organisations, representing the breadth of the current contemporary arts infrastructure in Manchester. In bringing together the art production of thirteen diverse organisations, Trade City reflects the trading and exchange that has taken place between the artists and curators partnering in CAM.

Each participating organisation has selected artists to work with that are representative of their curatorial approach or position, alongside exploring multi-faceted interpretations of ‘trade’. As a result, the presented works of twenty-six emergent to established international artists trade off each other in one space, creating aesthetic and spatial interplays, whilst addressing ideas of cultural, economic, geographical and political exchange.

In collectively working on exhibition and presentation formats CAM explores the ways in which contradictions or tensions and harmonies can co-exist within such frameworks, and in the case of Trade City, under one roof.

Andrew Bracey and Andrew Lim’s works have been brought together through Castlefield Gallery’s project Trade-Off. Lim has used found objects within the site of the Chips building to compose an elaborate large scale structure that plays with the physics of engineering, while Bracey’s piece uses found objects on which he has painted a variety of birds that will be pinned in small flocks throughout the building. Both artists use trickery, illusion, and delusion as their visual and conceptual punch line. The editorial choices the artists make to enable an object to become less of one thing in order to become more of another thing play an important role within their practice. At what point can an object with a functional purpose be traded-off as an artwork within a gallery space and furthermore, to what extent can an object with an associative meaning migrate to another meaning and set of associations? Through precise manipulation of objects and through conduct of space the work presented will be cunning, playful and humorous.

Andrew Bracey
works in an expanded field of painting and uses existing sites and the readymade as alternatives to the canvas support, creating tensions between the hand-made and the man-made. Intrigued by the visual saturation of contemporary life, his work often consists of hundreds of individual elements combined to create a whole as a way of interpreting contemporary lifestyle. His practice attempts to question the role of the individual and the crowd within this changing structure, through researching a variety of separate subjects, such as the cinematic frame, the zoo and beer mats.

Andrew Bracey (born 1978) is based in Manchester. He studied Fine Art at Liverpool John Moores University and MA Fine Art at Manchester Metropolitan University in 2001. He has had solo shows at galleries including: firstsite, Colchester; Transition Gallery, London; Wolverhampton Art Gallery and Mid-Pennine Gallery, Burnley. He has been included in many group shows such as John Moores 23, Walker Art Gallery, Liverpool; Small Mischiefs, Pumphouse Gallery, London; Swap/Vaihto, Bureau, Salford and The Cable Factory, Helsinki; and Beyond the Endgame, Manchester Art Gallery. He has taught at several Universities and is currently Senior Lecturer in Fine Art at The University of Lincoln.

Andrew Lim is interested in the devising and following of rules for the creation of structures that respond to the architecture and history of a site. He prefers to use objects that have a history with the site in which they are situated, either in a past usage of the building or as discarded elements found within the building. Lim uses mass produced materials to make sculptural installations by devising a set of rules for their construction, and then following these rules to their natural conclusion.

Born in 1979 Andrew Lim studied art in London before graduating in Fine Art Sculpture from Manchester School of Art, the city in which he is now based. He is a member of the collective 100th Monkey, and has recently exhibited work at the Chinese Art Centre, Manchester, The Royal Standard, Liverpool, and Vrits, Basel, Switzerland.

Initiated in July 2008 CAM has been developed with the independent and artist-led visual arts sector in the city, working to further the presence and awareness of contemporary art, through joint programming, audience development and profile raising, networking and exchange activities. CAM has arisen from a collective desire for a support structure to enhance and strengthen the partners’ current and future activities, and to provide an accessible platform for newly initiated projects to grow and flourish.

CAM aims to develop Manchester’s reputation regionally, nationally and internationally, as a centre for innovative contemporary art and curatorial practice; to create a platform for young artist-led projects to thrive; and to provide both direct and indirect opportunities for the professional development of artists and curators. Additionally, CAM aims to build and develop audiences for contemporary art.

An open system, the nature of co-operative working through CAM engages with notions of democracy, collectivity and self-organisation; examining and revealing the practices of people engaged with creative work within Manchester, who may be operating through less formal structures, or on the periphery of the city. Through collaboration CAM aims to redress this balance, creating a new central structure or ‘core’ for the production and dissemination of contemporary art.