Coinciding with the centenary of Roland Barthes’ birth, Castlefield Gallery’s annual Head to Head exhibition sees artist Magnus Quaife re-examining the French philosopher and literary theorist’s lasting influence. As a variation on an exhibition format which has previously brought together living artists at different stages in their career, this posthumous pairing has Quaife exploring lesser-known fragments of Barthes’ legacy.

Barthes wrote passionately about and was a great admirer of Cy Twombly’s painting. Though never exhibited during his lifetime, Barthes also produced his own works in which the influence of Twombly was always present. These intimately scaled abstract works contain repeated gestural marks, scribbles and scrawls reminiscent of Twombly’s work but clearly executed by Barthes’ hand. However rather than copying Twombly’s paintings Barthes was attempting to reproduce Twombly’s approach to painting. Barthes considered himself a Sunday painter and is said to have been amazed when anyone showed interest, but these works informed his writing on painting and particularly on Twombly as he developed an understanding through the act of making.

Quaife has worked towards a similar understanding through an act of unmaking. Painstakingly slicing reproductions of Barthes’ and Twombly’s work into their constitutive elements with a scalpel blade before reconstructing these fragments into new works, unpicking the moments of painterly language just as Barthes, in texts such as A Lover’s Discourse (1977) (where Barthes intertwines his own analysis with phrases taken from a selection of other texts) and S/Z (1973) (in which he dissects Honoré de Balzac’s short story Sarrasine (1830) over two hundred pages), un-weaving the multiple codes in literary works through his detailed structural analyses.

Castlefield Gallery has commissioned Quaife to make new work for the exhibition including a large diptych. In these new works Quaife pays homage to Barthes’ own painting and his critique of painting but he is also challenging Barthes by aiming to return some of what was lost in his reading. Specifically this is the importance of surface; so absent is any discussion of this key element of Twombly’s painting in Barthes’ analysis that it has been suggested he was looking at printed reproductions. Quaife in his turn has taken the fragments of flat reproductions and embedded them in textured painterly surfaces, reversing the flattening effect of the copy and of Barthes text.

The reproductions of Twombly and Barthes work are décollaged and then reassembled into new compositions, creating delicate yet imposing works that are at once paintings and the simulacra of paintings, originals built from copies, both authored and plagiarised.

Magnus Quaife (b. Nottingham, 1975) lives and works in Manchester. Solo exhibitions include Like a Child Running a Stick Along a Fence, WORKS|PROJECTS, Bristol (2014); 1968 & other Myths, WORKS|PROJECTS, Bristol (2012); The Cooperative, part of the Liverpool Biennial (2010), As long as the pain lasted, The International 3, Manchester (2008); Magnus Quaife, The International 3, Manchester (2005); and Magnus Quaife Plays the All year Round Club, Manchester (2004).  He has been included in group exhibitions across the UK, Europe, Australia and New York. Quaife’s writing has been published in ArtES, Microstoria, and Mandlebox. He is a lecturer in Fine Art at the Manchester School of Art at Manchester Metropolitan University, and has played a key part in organising Teaching Painting: A Conference, organised by Manchester School of Art in partnership with the Whitworth (29 – 30 October 2015) art.mmu.ac.uk. Quaife is represented by WORKS|PROJECTS, Somerset.  worksprojects.co.uk 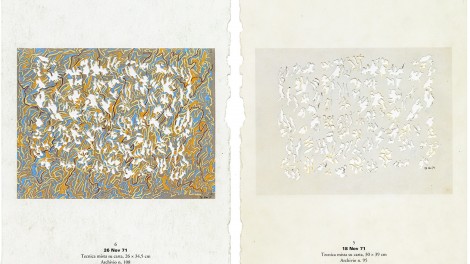