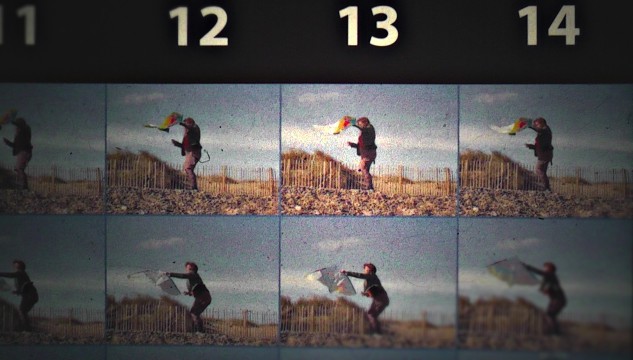 Join us for a formal viewing of the Babel Fiche film and a panel discussion with the collaborators.  Chaired by Mike Jones from Film and Video Umbrella and accompanied by artist Dave Griffiths, scriptwriter Stefan Skrimshire, editor Joe Duffey and musician Graham Massey, the panel will explore the transition from online project to film work and issues around archiving, authorship and collaboration. The event will also include an artists’ screening programme curated by Bureau Gallery in response to Babel Fiche.

Griffiths’ Babel Fiche film explores the human urge to collect, categorise and remix images through a critical questioning of the future of digital image archives. Beginning as an online call for user-donated video content, fragments from personal and public archives were collected and re-presented from the compressed contents as still frames printed on an edition of unique colour microfiche plates. Making sense of the excess imagery littered on the internet as well as in our personal hoards of photographic images and film footage, the project imagines how future generations may perceive the current times. In the making of the film Griffiths involved a number of collaborators, to broaden the scope of response to the archive content; Applied Ethics writer Stefan Skrimshire and poet Gaia Holmes as scriptwriters, musician Graham Massey producing the soundtrack, and artist and filmmaker Joe Duffy as editor.

Representing open sourced film footage, transposing it to redundant analogue media and launching it into a fictitious, post-digital future to be scrutinised by prospective generations of researchers, Griffiths alters our seismic understanding of time and history. He orchestrates a disjuncture between the actual, its documentation, consequential archiving and concepts of time-shifting, treating them as malleable components to be expanded, shifted and contracted, radically reappraising the production and consumption of culture. In Griffiths’ film the analogue image archive re-emerges as an object of scrutiny for a future generation of archaeologists, with a mise-en-scène of Manchester’s cityscape shot at the top of the iconic Beetham Tower skyscraper.

Film and Video Umbrella commissions, curates, produces and presents film, video and other moving-image works by artists that are staged in collaboration with galleries and other cultural partners across the UK.  Founded in 1988, Film and Video Umbrella has been at the forefront of this vibrant and expanding area of practice, promoting innovation through its support of some of the most exciting figures on the contemporary scene. During this time, the organisation has commissioned and produced numerous artists’ projects, ranging from ambitious multi-screen installations to shorter film and video pieces, as well as various online commissions.

Dr. Stefan Skrimshire is lecturer in Religious Studies, The University of Leeds and teaches courses in religion and politics, ethics and philosophy of religion. His research has focussed on the relationship between religious narratives of the future – apocalypse, millennialism and utopia – on political practices and movements. He is author of Politics of Fear, Practices of Hope (2008), editor of Future Ethics: Climate Change and Apocalyptic Imagination (2010) and producer of Beyond the Tipping Point? Conversations on Climate, Action and the Future (2010).

Joe Duffy is a Manchester based artist and educator working primarily with the moving image with a keen concern with place and movement. Recent subject explorations are concerned with apocalyptic landscapes, from the manmade to the natural, including ecological disasters and volcanic eruptions. These include mark making, mapping and drawing through gps and film material as a form of revealing subjective experiences and traces of places, often those with a traumatic or historical relationships to remembered events or unfolding socio-economic conditions. His interest in film aesthetics integrates an interdisciplinary approach with the connection of filmic language and editing structures structures to reveal a poetic and embodied form of storytelling.

Graham Massey was a founding member of the British band, 808 State, formed in 1988 in Manchester, England. Massey worked with Björk on her first solo album named Debut, which sold almost three million copies. He then subsequently worked with Björk on her next album Post, which became her second biggest selling album after Debut. He recently released the solo album Subtracks under the name Massonix on Skam Records.