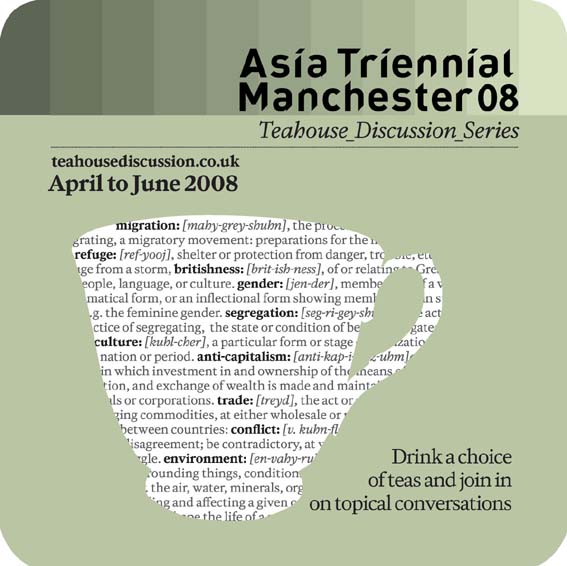 Asia Triennial Manchester Teahouse Discussion Series – Regeneration in Salford – Who is it for?

A favourite pastime across Asia and other parts of the world, the ATM08 Teahouse Discussion Series will provide an opportunity for people to talk about relevant and contemporary issues on the theme of protest – social and political, local and global – while sampling a selection of teas brought over from the ATM08 artists’ home countries.

Drink a choice of teas and join in on topical conversations on:

Teahouse Discussions will be chaired by artist Kooj Chuhan at venues in each of the Greater Manchester boroughs:

Kooj works as a film maker and digital media artist who has a particular interest in progressing cultural, artistic, social and historical issues from migrant perspectives within broad, global and local contexts. Particular aesthetic concerns include occurrences of threes, non-linearity, multiple re-formatting and musical interaction. He has been exhibited and published across the UK and internationally, has worked with many artists and communities at all levels and featuring at festivals such as VIDEO POSITIVE, ISEA and SIGGRAPH. Kooj has founded and run a number of groups and organisations such as the Virtual Migrants artists collective focusing on race, migration and globalisation, and undertakes projects, commissions and consultancies according to their merits at the time. He has a long-standing interest in education in its broadest sense and has previously worked as a scientist, a teacher, a community worker and as a musician. He also maintains an active involvement in various socio-political movements.