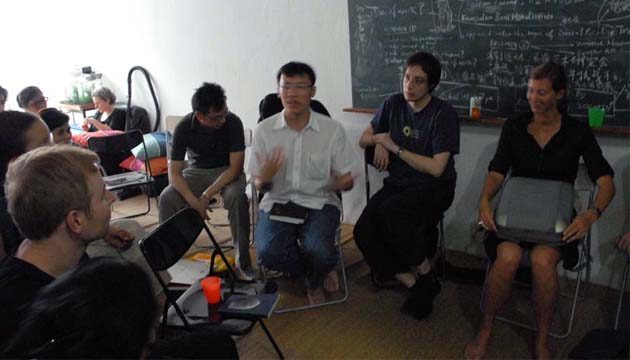 Channel_A has developed work responding to the 17th Century born George Psalmanaazaar, a bogus Taiwanese who was welcomed into the high society of London. In his book An Historical and Geographical Description of Formosa, he depicts Formosa (Taiwan) as a fanciful wonderland generating elaborate myths around every facet of life, from the costumes worn, to the language spoken and religious traditions to their diet. Based on his life and the book by Psalmanaazaar, Channel_A has reinvented Psalmanaazaar’s identity in the world of real-estate to explore the notion of property and fantasy in present day Manchester and Taiwan in an attempt to continue one of Psalmanaazaar’s unfulfilled tasks.

p-10 has developed a Symposium of the Local around the idea of ‘localness’ within a framework of interpersonal dialogue. Through a series of investigative meetings they aim to unpack the loaded term of ‘the local’ and the implicit meanings it holds within the context of the international art Triennial / Biennial. The symposium will bring together British based artists and groups who produce work in response to their local context and explore different notions of their ‘localities’ thus offering a comparative study of creative strategies employed by these artists and their engagement with their local communities.

In addition to the new work by Channel_A and p-10, Castlefield Gallery will host the teahouse hub in the Upper Gallery in which visitors will be able to drink tea brought to Manchester by the artists showing at the various ATM08 venues across Manchester thereby representing the participating countries of Mainland China, Hong Kong, India, Korea, Singapore and Taiwan. There will also be a travelling teahouse located throughout Greater Manchester, a network of temporary sites that will host a range of talks, panel discussions, performances, workshops and events commonly linked under the teahouse idea. Please see the ATM08 website for updates.

Channel_A, initiated by Hongjohn Lin (Taiwan) and Ella Raidel (Austria) in 2004, is a collective of different participants. Channel_A provides a programme of emerging socio-cultural issues by adopting the language of media to channel into our everyday lives, perceptions, interactions and imaginations. Channel_A has shown at Maintrend Gallery Taipei, Tainan National University of Arts Taiwan, Doland Museum, Shanghai, Galerie Momentum, Vienna and at the National Palace Museum, Taipei.

p-10 is an independent curatorial team based in Singapore who are collaborating with Kai Lam and Jeremy Chu for ATM08 at Castlefield Gallery. Working mainly in the area of contemporary visual art, it has worked with a large number of local and international artists, curators and art spaces. p-10’s specific areas of interest include networking, dialogue and interaction between art practitioners and audiences. In 2007, p-10 initiated the creation of a new independent cultural space called Post-Museum. Located in the historic Little India district of Singapore, Post-Museum seeks to examine contemporary life, promote the arts and connect people. The space aims also to respond to its location and community as well as serve as the hub for local and international cultures. Projects include solo exhibitions of Cultural Medallion winners Lee Wen (2004) and Chng Seok Tin (2005), an exhibition in the Singapore History Museum (now National Museum of Singapore) to celebrate National Day (2005), working with Singapore Biennale as one of their host venues (2006) and guest-curating an exhibition of Singapore art for notthatbalai held in Kuala Lumpur, Malaysia (2007).

Kai Lam studied Sculpture at Lasalle-SIA College of the Arts. In 2001, he graduated from the Royal Melbourne Institute of Technology in Bachelor of Arts where he majored in Sculpture. Versatile with prolific skills in drawing, painting, sculpture, mixed-media installation and performance, Lam also collaborates in theatre productions and co-organizes art events.
Lam is the president of alternative the art group, Artists’ Village and helped to initiate Artists Investigating Monuments in 2000 which presents installations and performances in various public sites. They have also presented at the Singapore Art Museum, 2004 and Museum of Contemporary Art, Sydney and House of World Culture, Berlin, 2005. In 2003, he started to co-organize Future Of Imagination, an annual international performance art festival that showcases performative practice. Since 1999 he has travelled to different countries in Asia and Europe to present his art projects.

Jeremy Chu is a Singapore born artist, photographer and cultural worker. For the past 10 years, he has worked in Singapore, Boston, New York and Australia. He studied museology and exhibition making as an intern at the MIT List Visual Arts Centre, Boston, Institute of Contemporary Art, Boston and Art Interactive, Boston, USA. He studied fine art photography at the Art Institute of Boston. Since 2004 he has collaborated and organised community-based art projects using dialogue and participation as a mode of engagement and enquiry. Projects included Sifting the Inner Belt (Boston Centre for the Arts, Boston, USA, 2005), National Bitter Melon Council, (Boston, USA, 2005-present).
As a solo artist, he has created site-specific installations and durational performances that examined his relational history concerning Chinese diasporas, identity politics, ideas of home and the public sphere, projects include The Fisherman’s Net: A Journey towards Reconciliation (Art Institute of Boston, Boston, USA 2003) and The Renaissance Window Project: A Parallax View (Artist Home Studio, Boston, USA, 2006). In 2007, he travelled to his ancestral home of Chaozhou, Guangdong Province, China to film a Channel News Asia documentary The Road Home, in conjunction with the National Month of Singapore. As a professional fine arts photographer, Chu is represented in private collections in the United States of America and Australia.

Asia Triennial Manchester 08 will show fresh and innovative work that represents the best of contemporary visual art and craft practice from Asia: a festival of visual culture that not only celebrates Manchester’s diverse communities but also explores cultural, artistic and political debates of the 21st century. The international programme features stunning venue-based exhibitions, surprising site-specific new commissions, innovative residencies and extraordinary publicly sited work by artists from China, Hong Kong, India, Korea, Singapore and Taiwan. None of the work featured has been seen in the UK before and for some of the artists ATM08 will be their UK debut.

ATM08 at Castlefield Gallery is supported by the Taipei Representative Office in the UK, National Arts Council Singapore and the Margret Bilger Scholarship.