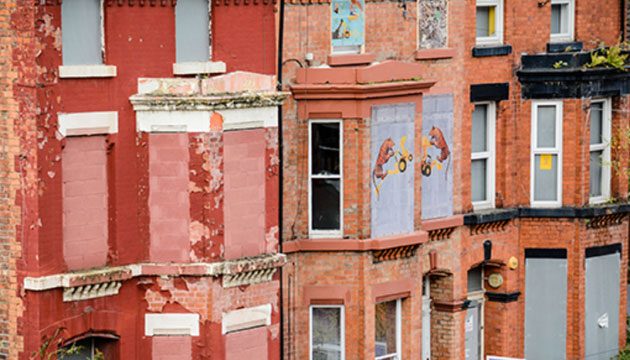 For CG Associates only

Following on from our series of CG Associates events this year looking at Space and Place, artist Nina Edge will examine what it means to make art in the service of life. Drawing on a long career of making, Nina will focus on the use of art strategies in the fight to save the Welsh Streets in Liverpool from demolition, the ways different people have wanted to use an artwork to help an area, and the effects on non-artists of getting involved in artmaking.

Nina’s home in the Welsh Streets area of Liverpool was one of thousands slated for demolition as part of the Labour government’s questionably-named and disastrous Housing Market Renewal Scheme; her contributions to the successful resistance campaign ranged from making submissions to parliamentary select committees to turning her own home into an artwork. Of the nine areas in Liverpool marked for “renewal”, the three that were saved all used art strategies in some way. As gentrification consumes ever-increasing chunks of Manchester and Salford and studios are forced further and further from the city centre, what can artists learn from what happened in Liverpool?

Nina Edge [http://www.ninaedge.com] trained as a ceramicist and became known for her subversive use of craft processes in shows with Black British artists in the 1980s. She went on to work with techniques such as batik, shisha and shifli embroidery. Her live artworks and radical textiles have been widely shown, and include collaborations with Visual Stress, and Moti Roti. She uses the inherent value of materials to communicate with wide audiences, recently producing large-scale prints in commercial graphic vinyl on glass and using the windows of commercial, public and domestic spaces to bring art out of the gallery.  Previous experiments with the status of materials include installations with international currency, sugar, gold, keys and felt tip pens. She is currently working on a horticultural commission in Toxteth where she has become known as an artist activist and teachins an eight-week course on Art and Society at Tate Liverpool.

Publications including Third Text, International Journal of Art & Design Education and Feminist Art News. Exhibitions include Virtual Duality (Bluecoat, 1994), Mirage (ICA, 1995) Transforming the Crown (Studio Museum in Harlem, 1997), The Fifth Floor: Ideas Taking Space (Tate Liverpool, 2008), Turning FACT Inside Out (2013) Live work includes Sold Down the River, a 1995 performance in Liverpool, described as ‘A Post Betrayal Intervention for a Post Industrial City’ and the 1996 Observers Book of Independence. Her practice is socially and politically engaged, delivering interventions at the Turner Prize in praise of Habeas Corpus, hoardings in Arabic and Hebrew, and games & maps.

See http://www.2up2down.org.uk/events/expert-meeting-5/ for more information about Nina’s work with the Welsh Streets campaign.