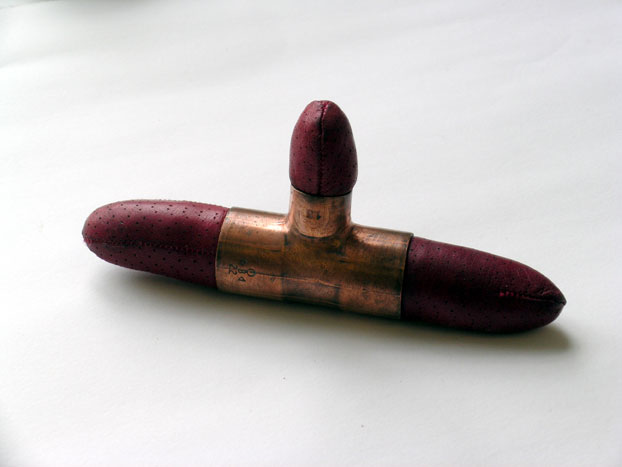 ‘Acts of Generosity’ is an exhibition of new works by Simon Le Ruez, created for Castlefield Gallery’s Project Space. Le Ruez’s sculptures, drawings and installations consider the process and consequences of remembering, exploring the plight of individual lives through a dialogue of little curiosities.

Le Ruez’s work is characterised by a disquieting and subversive use of materials, which frequently refer to the domestic, and a sense of nostalgia. Through moulding and reshaping these materials it is often his intention to create a traumatised, dysfunctional object or environment with its own specific history. The drawings, from an ongoing series entitled ‘Any Given Sunday’, are made directly onto net curtain, which has been soaked in plaster. They depict seemingly random acts and occurrences where meanings, like memories must be pieced together.

The use of copper piping in some of the sculptural works, as with the net curtain, refers the viewer back to the home and to something that is usually hidden and we are not meant to see. These works amplify a sense that maybe we are looking at something we ought not to be. The sculptures vary from curious little props that someone might carry around with them, to life size, albeit awkward beds that harbour not people but metaphorical landscapes.

Conflicting comforts, ritual and a sense of unrequited feelings are recurring subjects for Le Ruez and he is clearly interested in creating a series of both psychological and aesthetic contradictions. The works become united through a strange fascination with the forbidden and a suggestion of the places we go to in order to seek some degree of relief.

MORE ON SIMON LE RUEZ:
Born in Jersey in 1970, Simon Le Ruez completed an MA in Sculpture at Winchester School of Art in 1995. Since then he has exhibited widely both nationally and internationally; forthcoming exhibitions in 2005 will take place at Arhus Kunstbygning (Museum of Modern Art) in Denmark and Angel Row Gallery, Nottingham. Le Ruez has recently exhibited in ‘Marks in Space’ Drawing and Sculptural form at the Usher Gallery, Lincoln; a solo show, ‘Threats and Promises’ at Bloc Space, Sheffield; ‘Postcard Show’ at Surface Gallery, Nottingham; ‘Return to Sender’, Pitt Rivers Museum, Oxford and ‘Pleasures Taken’, a drawing exhibition, Derby City Museum and Art Gallery. He has received several awards and scholarships including ‘Inspiral Creativity Award’ in 2003 and an Arts Council Travel Award to New York in 2002. Simon Le Ruez lives and works in Sheffield.