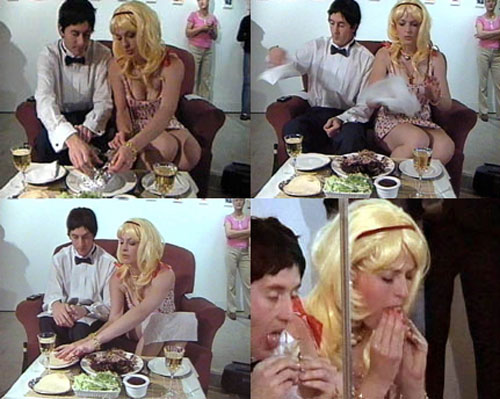 Adela Jones’ performance is part of a series, currently in development, of live ‘staged relationship scenarios’, exploring the nature of interaction and communication in intimate human relationships. ‘A Romantic Meal for Two’ will involve two performers, one male, one female, sharing a meal in a sitting room with the television on. The performers will interact in near silence as Jones draws attention to repetitive and precise eating actions and their relationship to the environment in which they take place.

Aroma, sound and movement will be created as the performance focuses on the process and method used to prepare and eat ‘aromatic crispy duck’. The audience’s movements will be unrestricted so they will be able to experience this from positions of their choice within the space, with the possibility of interaction with the performers as they are invited to share the couple’s meal.

MORE ON ADELA JONES:
Adela Jones graduated in BA (Hons) Illustration with Animation from Manchester Metropolitan University in 2000. She has participated in several residency and community projects, working with galleries, schools and hospitals, and has exhibited widely in the North West. Jones has recently been awarded a ‘Research and Development Grant and Residency’ at Grizedale Arts in Cumbria. As part of this residency a live interactive performance, ‘Stock judging Event’, will take place in September 2003.