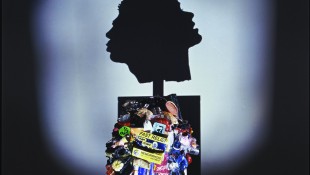 Castlefield Gallery is proud to present BORN AFTER 1924, a project by German artist Ingo Gerken. Interpreting the contemporary legacy of the Merzbarn and Kurt Schwitters(1) in the UK, Castlefield Gallery has invited Gerken to respond to Schwitters’ Merz Magazine (issue 8/9) of 1924 called Nasci. The theme of the magazine, Nasci(2), meaning ‘being born’ or ‘becoming’, was co-edited with Russian Constructivist artist El Lissitzky(3) forging an alliance of Dadaist and Constructivist ideals and included reproductions and texts by Vladimir Tatlin, George Braque, Man Ray, Piet Mondrian, Kazimir Malevich and Mies van der Rohe among others.

Often referring to his work as ‘activating’ art-historical contexts, Gerken is interested in the porosity of imagined and real spaces, their construction, flexibility and weight. BORN AFTER 1924 will become a group show and a site-specific manifestation of Gerken’s shifting and re-arranging of the contexts of Dada, Merz and the Nasci issue of 1924 itself. A re-edited and updated version of the historic avant-garde magazine will be published to accompany the resulting group show. The exhibition will become a physical manifestation of Gerken’s collages that will include other invited artists, from the UK and Germany as ‘articulations’ or ‘punctuations’ of his own practice. The exhibition will transform the gallery and represent a condensation of Gerken’s diverse and playful art practice drawing on some of sensibilities of Schwitters’ work.

(1)Kurt Schwitters’ (1887–1948) Merzbarn is located in a remote woodland in Cumbria and stands much as he left it incomplete after his death in 1948. After considerable discussions about its future which involved the British pop artist Richard Hamilton the surviving Merzbarn wall was removed for safe keeping and presented by its owner, Harry Pierce to Newcastle University Hatton Gallery in 1965, where it is now on public view. The Merzbarn building itself still survives and contains evidence of Schwitters’ original working methods and materials.