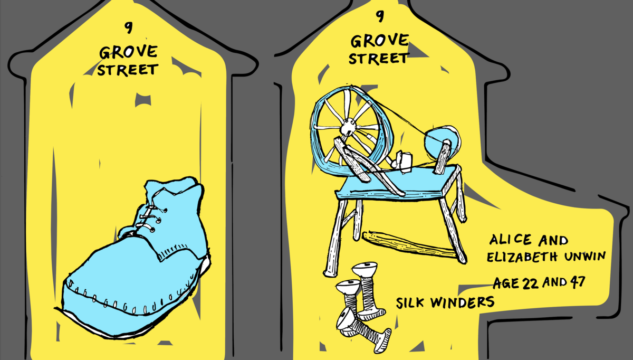 a place lived by artist Maddi Nicholson who lives and works in Cumbria, is a series of playful cast iron enamelled sculptures that invite us to reflect on those who shaped Spinningfields in the 1800s. The sculptures bring to life the stories of people who occupied the area when it was packed with terraced housing, providing homes for workers in the industries operating close by at the time. It’s often said of Spinningfields that there was ‘nothing there’ before the now thriving financial district was built, but this is far from the truth.

Present day residents, workers and visitors to Spinningfields will be able to view and interact with the series of sculptures, each one located on the site where its corresponding house once stood. The sculptures will visually tell the stories of the past occupants of the houses they represent, including Martha Barry a ‘Washerwoman’, Maria Spencer ‘Keeper of the Mangle’, and Martha Harrison the ‘Knocker Up’.

In developing a place lived, Nicholson has mined census and archive materials, and worked with teams of specialists up and down the country to produce the final works.

The website for a place lived will invite people to delve more deeply into the rich history of Spinningfields and its historic communities, as well as share further information on Nicholson’s research and production process for making the works. An off-site exhibition of related archive material and research will be on display in Archives+ in Manchester Central Library from Friday 19 July to Saturday 17 Aug 2019.

a place lived by Maddi Nicholson will remain on permanent public display at Hardman Square, Spinningfields.

Maddi Nicholson on a place lived

“As a girl I made things and entered them in Carlisle’s Cumberland Show, ‘industrial section’ classes, and won on a regular basis the most points in the Junior Section. I took home the Springfield Silver Trophy for 7 years in succession from 1974 – 1980, a record not yet beaten. Looking at these childhood beginnings, I now set myself new industrious challenges, in classes of my own making. This is one of them.

I am delighted to be working on this commission with the team from Hardman Square, and Castlefield Gallery. It’s been a privilege to delve into the unseen past communities of Spinningfields and bring to life their stories. I’ve developed a great respect for these families, and women the work focuses on, as I’ve followed their lives and professions through each census. I would love to find present day descendants to share these histories with.”

a place lived has been co-commissioned and produced by Katie Popperwell and Castlefield Gallery for Spinningfields Estates Ltd.

a place lived has received additional support from public funding via the National Lottery through Arts Council England.