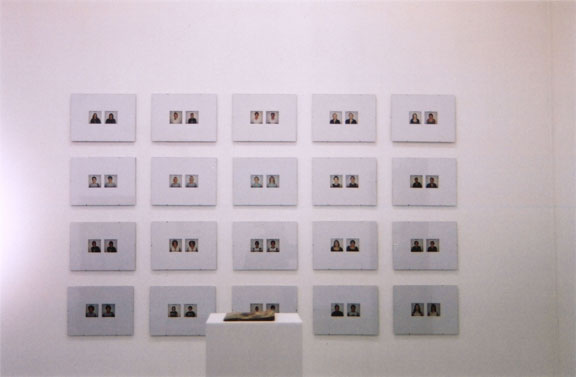 ‘When In Rome III’ – Curated by Raimi Gbadamosi

‘When in Rome III’, features artists engaged with a range of personal issues within their practice, which then interacts with the socio/political space of contemporary British Art. In presenting artists of ‘cultural diversity’ who consider their practice a profession, the show functions as a discursive space, a forum, to debate the consequences of history, language, and artistic authority.

‘Art as a language’ extracts various definitions from these artists. For some it is a political act, for others it is a conceptual exploration – a processing of ideas. For some individuals, it is the formulation of an emotive and personal language.

This multiplicity of standpoints consequently interrogates the intellectual/social space artists and their work occupy. What is the role of the artist? Who is the audience? Are the artists aware of audience demographics? What decisions are made about their practice in response to this knowledge? What are the effects of these decisions?
After the Eighties’ legacy of ‘identity politics’ and an exhibition like The Other Story at the Hayward Gallery (which raised issues of artistic validation and critical exposure), the ‘success’ of a generation of ‘Other’ artists has been codified by the bestowing of ‘mainstream’ accolades such as the Turner Prize. Attempts to then define who these ‘Other’ artists are and what Art of the ‘Other’ is – as an oppositional practice – has become problematised.

There is no pre-defined theme for work featured in this exhibition; the show has formed itself around the diversity of practices/approaches. The resultant freewheeling discussion is characterised in the accompanying publication – a project book containing images, texts, transcriptions, statements, and drawings by the artists.

Ultimately, this is an opportunity to have a critical dialogue about what art practice is, and where it is heading. It is a platform to discuss the contributions of living artists engaged with issues born of history, but with lasting manifestations in their own time.

MORE ON RAIMI GBADAMOSI:
Raimi Gbadamosi is an artist, curator and writer. He received his doctorate from the Slade School of Fine Art, researching the use of black people in British Advertising as well as his studio practice. Gbadamosi’s work features in several public and private collections and he has exhibited and published widely; his new book ‘Four Word’ was launched in March 2004. He has curated a number of exhibitions, including ‘Homeland’ with Spacex Gallery, Exeter. Gbadamosi is based in London and teaches at the Kent Institute of Art and Design.