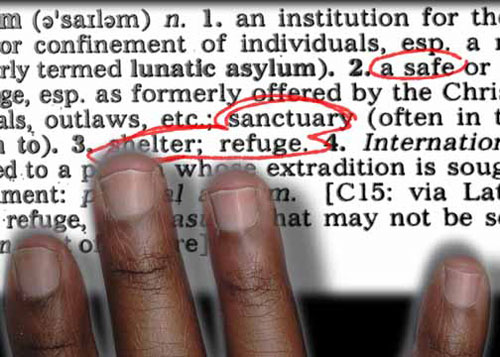 Five new digital, interactive and video art works which respond to those forces that generate the Refugee while denying their reality and existence. A journey which explores human notions of landless exile and collectively places us as global participants; a poetic weaving of spiral narratives and critical metaphors re-mixing both visuals and sound to create alternative explorations of reality.

This is major collaborative digital art project by a diverse range of artists and collaborators which also breaks the boundaries of artistic labels and cultural practice. The works encompass a broad span of distinctive approaches from Tang Dynasty poetry to interactive software programming, and an equally broad range of creators from internationally recognised artists to asylum seekers and school students.

“Complex issues, such as migration and refuge, generate complex emotions. Complex questions demand complex answers. The simple headlines and ‘obvious’ solutions that assault us from the newsstand every day conflate and distort our thinking. We go shopping, while the majority world goes hungry. The journey to understanding begins by resistance to the colonisation of our thinking space, our mental environment. Terminal Frontiers is a measured, elegant and passionate set of inter-related art works that refuses to hide behind easy rhetoric and does not accept any agendas other than its own”
Aidan Jolly, co-director of Terminal Frontiers.

Two digital artists Kuljit ‘Kooj’ Chuhan and Aidan Jolly founded virtual Migrants Association in 1998 to bring together a range of artists to collaborate on digital art based projects. Its main purpose is to draw public attention to the voice of migrants whose existence is held in question and the political issues that are increasingly making headline news. Virtual Migrants aims to add new aesthetics and perspectives to the established race agenda developed in the 1980’s by looking at the roots and terror-ridden consequences of the new world order in relation to the UK.

KULJIT ‘KOOJ’ CHUHAN is a video & digital media artist from South Asia. His work has been screened, exhibited, and published nationally and internationally including Australia, USA, France and Eastern Europe. Recent work includes ‘Resonance’ installation shown at ISEA 2000 (Paris), and ‘From Punjab To Football’ video for Manchester United FC. His three-screen dance installation ‘Boundless Sky’ is currently touring, and he is a commissioned artist for the Commonwealth Games.

AIDAN JOLLY is a self-taught musician and multi-media artist, who take inspiration from cultural movements associated with the worldwide struggles of ordinary people for social justice. His songs, music and digital works are firmly rooted in the communities with which he works. Recent work includes video and animations projected as part of a touring performance ‘Broken Planet’, collaboration with Community Arts Northwest/The Big Issue in the North.

Other artists with the Virtual Migrants Association include:
TANG LIN an artist and writer who’s writing has been published in The Bloomsbury Book for Love Poems selected by Benjamin Zephaniah. MISELO KUNDA-ANAKU an emerging artist born in Birmingham with roots in Zambia, with a turbulent migrant history experienced through her mother Manda Kunda. JILAH BAKHSHAYESH a musician trained in classical violin yet crossing over into Klezmer, Iranian and Jazz. HAFIZA MOHAMMED a textile artist who works on abstract geometry integrated with traditional patterned forms and also as a performer reflecting her life in Britain.

Terminal Frontiers: More on the artwork “What If I’m Not Real”

SYNOPSIS
An electronic installation where masked figures each on a raft at sea emerge across a circular triptych of three video projections. Within this landless and timeless space the intertwined conflicts between a parent, a child and officialdom are emotively played out with bloody consequences to create a provocative audio-visual sculpture that allows a simple and human understanding of asylum and global terror to take place. In addition to visual digital techniques, each repeat loop of the work has a different soundtrack suggesting alternative meanings for the same reality, while the viewer is forced to stand below a connective yet threatening net in order to engage with the full power of the imagery.

“What If I’m Not Real” is the first production by the Virtual Migrants ‘v2 collective’ and is directed by Kuljit ‘Kooj’ Chuhan.

“We are continually moved to deflect the terrifying realities of global politics from our everyday human concerns, assisted by sinister yet convenient ways to imagine that neither perpetrators nor victims are actually real people, further added to by media distortions of who the perpetrators are. Despite this there remains a widespread suspicion of the official line and a keen interest in understanding the hidden nature of global events, such as the fact that most global conflict is created or fertilised by western interests which then demonise the asylum-seeking products of that conflict: perhaps we need to be guarded from the arrival on our doorsteps of the human reality of western policies? The v2 artists associated with Virtual Migrants choose not to deflect their passion from these realities, and over a period of 2 years have come to grips with the fact that human individuals are responsible for both causes and consequences. We have developed Tang Lin’s minimalist poetry on the beauty and suffering of such human concerns into an incredibly compact and cohesive work of narrative art.”
Kuljit ‘Kooj’ Chuhan, director of “What If I’m Not Real”.

Terminal Frontiers: More on Keith Piper and the artwork “Stranger”

“Stranger” part of the Terminal Frontiers exhibition is a rare opportunity to see the work of Keith Piper in the UK, since his highly acclaimed solo exhibition Relocating The Remains at the Ikon Gallery Birmingham in August 1998.

”There is clearly a glaring gulf between the current political establishments rhetorical celebration of ‘multiculturalism’ and its blatant pandering to the base xenophobia which distorts the reception of those currently ‘seeking Asylum’. It is the contradiction between these two bodies of rhetoric, which ‘Stranger’ will explore. On the one hand, inviting the spectator to enter details of their identity into a virtual database, which plays upon the utopian rhetoric of Article 14 of the Universal Declaration of Human Rights. On the other hand, a xenophobic counter text will be generated, characterising the spectator as ‘stranger’ as ‘other’ and as ‘parasitic outsider’.