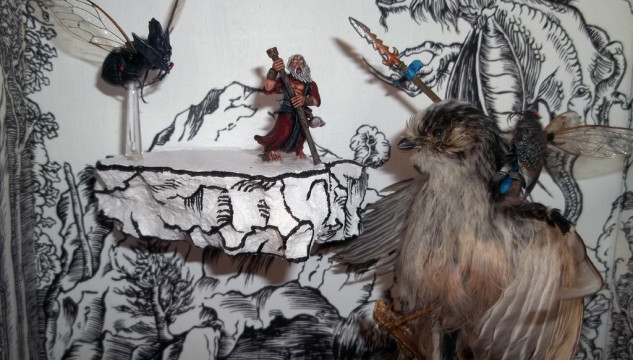 Join us on Thursday 6 March from 6-8pm for the preview of our annual Re-view exhibition by Iain Andrews.

Andrews has gained significant recognition for his seductive and sensuous paintings, which combine art historical references with dedication to a visceral painterly language. He has exhibited internationally and has been shortlisted for prestigious prizes inc. the Jerwood Drawing Prize and the Marmite Painting Prize which he won in 2011. His work has attracted the critical attention of writers and curators resulting in a rich dialogue around his practice including a piece of creative writing by Joanne Reardon Lloyd.

Andrews’ work mixes the colour palette of contemporary abstract painting with the dirty browns, cracking paint and varnished sheen associated with the Old Master and nostalgic Victorian painting, from which he also appropriates various compositional and figurative elements. He also works in dialog with folk tales and the themes of historical paintings. Though his works demonstrate knowledge and skill he does not over-identify with academic sophistication or current trends in contemporary art, rather he reveals a confident belief in his work that has no need of such validation.

This Re-view exhibition will give Andrews the opportunity to show a selection of the paintings and drawings he is known for alongside recent sculptural pieces such as Il Teatro dei Leviatano (2013) a miniature theatre constructed with intricately illustrated props and backdrops and ambitious new works. At Castlefield Gallery he will apply his draftsmanship skills to a new site-specific work for the gallery’s double height space. This large-scale mural will form a dramatic backdrop, making overt the gallery’s function as both a platform for viewing and a stage on which a drama is played out, positioning the viewer as a protagonist in art history’s ongoing dialogue.

His paintings reflect a 20th century shift in our attitude towards history; rather than depicting a moment in a linear chain of events they mark points in a skein of relations. Many of the historical paintings Andrews appropriates depict moments within a narrative, a frozen point in a drama, which provide the viewer with a space for stillness and quiet contemplation. Andrews’ takes figurative references and mixes them with complete abstraction. Presenting a sense of narrative progression in the form of the paintings themselves, they depict the noise of history, churning and oozing under the weight of disparate story lines without beginning or end. This sense of eternal movement, of constant recontextualisation with the viewer firmly positioned as a part of it, provides an alternative space for contemplation. Andrews’ works thrive in a time when an increasing awareness that the meaning of all things is always already changing shares the same space as candid belief in consistent truths.