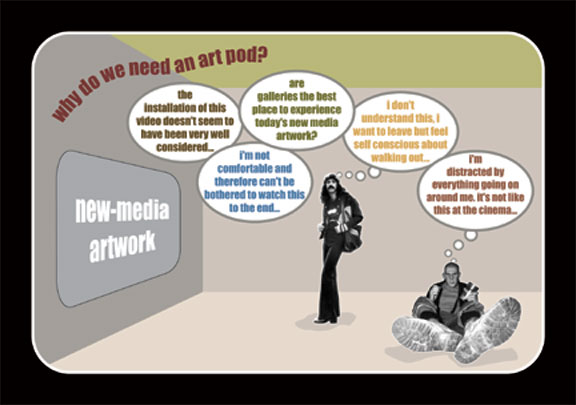 For ‘New Plastic Universal’ Cove will exhibit drawings, architectural models and a large scale prototype piece ‘Art Pod’, exploring issues related to design and architecture through proposals for schemes that go beyond our everyday perception of our environment. The work is influenced by Archigram, the Italian group, Superstudio and the architect Lebbeus Woods, with whom Cove shares a common desire to produce ideas that would radically alter our built environment, giving us glimpses of a new utopian vision.

Cove’s interest in ideological approaches alongside visual production techniques has led to his creation of images of proposals, which though ideologically sound, are far from comprehensive designs. His central interest lies not in the details of how to build such schemes, but in the approach and the state of mind involved, and importantly in the visual language used to illustrate such schemes. It is an attempt to communicate a means of perception rather than offer a set of practical solutions.

Many of the proposals are Manchester sited, although it is not Cove’s intention to explicitly ‘sell’ these schemes in the work; instead they act as a beginning point for the images produced. The focus is essentially on the visualisation of the proposals. Cove’s large scale schemes include proposals for a Manchester Gateway, Cable Car System, Pod Buildings and Instant Park. Smaller scale schemes are ArtPod, Multi-Recycle Truck and a Castlefield Gallery Extension.

Ben Cove studied Architecture at the University of Nottingham (1993-1996) and Fine Art at Sheffield Hallam University (1998-2001). Since leaving education his work has been regularly exhibited across the country. Perhaps best known for his large paintings on wheels; his first major solo show Tilted was at L.M.U. Gallery in 2002. His work was featured in one of six short films entitled Natural Born Talent broadcast on Channel 4 in 2002. Not to be confused with a small coastal inlet in Massachusetts, Ben Cove lives and works in Manchester.