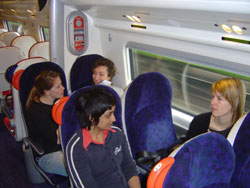 In order to develop links between artists based in London and the Northwest, Artquest and Castlefield Gallery are inviting artists to participate in a seminar discussion on the relationship between art in London and the rest of the UK. The panel of speakers have been selected because of their experiences of working across the UK: they include Manchester artist Nick Crowe; Becky Shaw who has recently moved from Liverpool to London via Cambridge; and London-based artists Andrew Cross and Olivia Plender, who also exhibit widely across the UK.

Please note that this opportunity was by invitation only. No submissions accepted.

Andrew Cross
Andrew Cross began working as an artist in 2000 after establishing a successful career as a curator. Working mostly in photography and more recently video he has explored subjects close to lifelong interests: travel and the machines of transit, together with a curiosity for where things come from.

In 2002 Cross published his first book Some Trains in America which was followed in 2003 by Along Some American Highways. In 2004 Cross was short-listed for the Beck’s Futures Prize. His Film and Video Umbrella commission An English Journey has toured from the John Hansard Gallery Southhampton and Rugby Art Gallery and will finish its journey in Manchester at the Castlefield Gallery.

During the 1990’s Crowe was co-director of The Annual Programme (with Martin Vincent) and he continues to work on artist-led initiatives like The Manchester Pavilion at the Venice Biennale. He is currently a research fellow at Manchester Metropolitan University.

Becky Shaw
Becky Shaw’s work explores the way individuals negotiate their relationship to society. She works primarily to contract in social situations, in leisure, health, work and education, revealing social relationships at play. Alongside her own practice Shaw is co-director of Static in Liverpool.

Following a PhD in 1998 exploring the use of art in palliative care, recent projects include Reception at the University of Bath and Presscorps at the Liverpool Biennial Independents. Shaw’s most recent project Transfer was an attempt to move the entire art collection of the Manchester Royal Infirmary hospitals to the Castlefield Gallery.