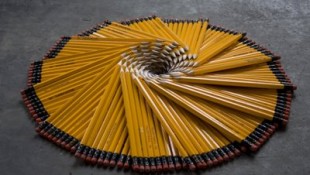 Castlefield Gallery is pleased to present On Measuring Uncertainty, consisting of new sculptural work by Kit Craig and Andrew Lim. The works use references that range from early computer programmers flow charts and a 16th Century hermits dwelling to a cryptic interpretation of Rembrandts Self Portrait With Two Circles. In part reliant on the laws of physics and mathematics, the works combine both a sense of geometry and natural form, deciphering the vernacular of traditional gallery display or rearticulating the use of materials that are indigenous to the gallery space. .

Craig uses drawing as a central part of his practice, pushing our understanding of it, not only as a mere recording of thoughts or as an observational tool, but as extensions of the picture frame; viewing devices that attempt to articulate the process in which they were conceived, made and viewed. Often using everyday objects such as shelves, chairs or scaffolding, Lims approach is more extemporary in nature yet is carried out within a premeditated modus operandi governed by the space in which he works and contingent upon its materials and its dimensions. On Measuring Uncertainty will investigate broad philosophical themes of human knowledge and understanding, science versus religion or meaning in a contemporary context.

On Measuring Uncertainty is kindly supported by Atlas Bar; Manchester and Barefoot Wines.