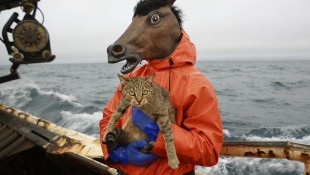 A Horse walks into a Bar

Castlefield Gallery is pleased to present a group exhibition A Horse walks into a Bar including work by Corey Arnold, Richard Billingham, Andrew Bracey, Lorraine Burrell, Maddi Nicholson, Dan Staincliffe, Chiz Turnross, UHC and Mark Wallinger. Using a range of media such as video, painting, photography, sculpture and performance, the artists playfully examine the parameters of human and animal characteristics and question the evolution of the human race.

Some of the work blurs the boundaries between nostalgia and abhorrence, referencing the use of animals in the entertainment industry, whilst other work references animals in heraldic, mythological stories. Conventions in visual art practice are also deliberated, highlighting the inter-dependence of living beings in a contemporary world, these range from the allegorical use of animals in traditional regal portraiture to other works that alter our perception of sculpture by fusing animal imagery with mass produced objects.

The exhibition can be seen as reflective of our increasingly uneasy relationship with the natural world that is tainted with confusion, contradiction and confrontation and will oscillate between the playful, sinister, surreal and controversial. Co-curated by Castlefield Gallery staff and Jane Anderson.